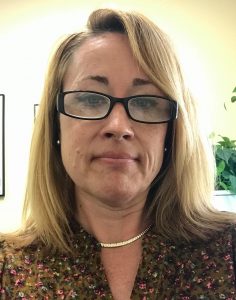 Sara W. Sutphin, MEd, is a licensed psychological practitioner and therapist. She has been practicing since 2006 and has extensive experience working with adults in a variety of settings with depression and anxiety disorders utilizing cognitive behavioral therapy.  Since the beginning of the Louisville Center for Eating Disorders in October 2017, she has treated multiple individuals with anorexia, bulimia, and binge eating disorder.  Using a team based and cognitive behavioral approach, she has treated individuals attending Intensive Outpatient (IOP) and in outpatient settings.  Co-occurring issues are also addressed, past trauma, depression, anxiety, and personality disorders.  Additionally, she leads a group for individuals with body image issues that have often contributed to the development and maintenance of the eating disorder.

In 1994, she earned her Bachelor’s degree in Psychology from Mary Baldwin College located in Staunton, Virginia. She received her Master’s degree in Counseling Psychology from the University of Louisville in Louisville, Kentucky, in 2006. Since that time she has worked as a clinician in sex offender treatment at the Kentucky State Reformatory in LaGrange, Kentucky. From 2013-2016, she has worked with adults with traumatic brain injuries.

Sara lives in Louisville with her husband and two boys.